The American Civil War from 1861 through 1865 is sometimes described as the crucible from which the nation was forged. The cost to the States, north and south, in blood and treasure, is almost inconceivable. This one war accounted for nearly half of all casualties the United States has suffered since its formation. 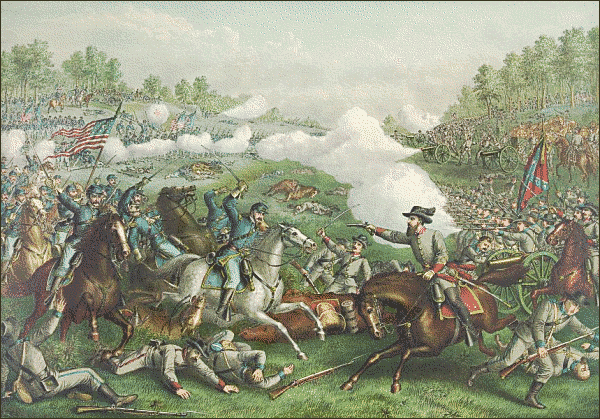 The Battle of Opequon of Winchester, 1864

From the beginning of the war with the Confederate attack on Fort Sumter, SC, April 12, 1861, to the last battle at Palmito Ranch, Texas, May 13, 1865, the number of lives lost in battle, in prison camps, from disease and exposure, and through causes directly related to the war reached staggering proportions. (See the National Park Service Website for an informative presentation of facts about the war.)

This Library Guide will provide a staring point and information to aid in your research about the Civil War.

All Books at Rowan

To find books use Rowan's Library Search and limit the material type to Books. You can do this either from the Advanced Search page (use the Material Type drop-down menu on the right) or from a search results page (use the Resource Type limiter).

The library organizes its materials using the Library of Congress Classification System (LCC). The classication ranges below also relate to period immediately preceding the onset of Civil War military action. In this classification system the letter "E" represents all United States History.

(Click "Watch on YouTube.com" for link to the complete film on PBS)

Causes of the Civil War: Part 1

Causes of the Civil War: Part 2